The house at Arte Umbria

I increased the length of my manuscript by 47,000 words between the 20th of June and the 4th of July this year.

For me, it’s a massive result, because I’m not the fastest writer in the world. How did I do it? I went on a writing retreat.

Before I began going on retreats I looked askance at other writers going to lovely venues to write. Was this not a thinly-disguised holiday? A bit of a jolly with your mates? I’m the first to admit that I love going to Italy to work on a sunny terrace and also to enjoy the company of other writers at meal times and in the evenings, but it is not a holiday to write approximately half a first draft of a novel in two weeks.

I love the sun so put my laptop into a handy box to enable me to see the screen. Other writers took the more conventional route of writing in the shade.

So how does a retreat work for me?

In case you’re wondering if the 47,000 words were a fluke, last year I was only on the writing retreat for one week and wrote 23,000 words.

Part of my apartment

I suppose if I stayed at home, cancelled my classes, ignored my family and friends and had meals delivered I might achieve a higher writing output than the norm but somehow I don’t think it would be the same as ‘getting away from it all’ to a peaceful, beautiful venue that inspires as well as frees me.

I love Arte Umbria. I taught writing courses there for several years but now I’ve moved onto heading up writing retreats instead. In my mind, it’s also the setting for One Summer in Italy, the town of Montelibertà being built around it. My imagination grew the house into Casa Felice, the hotel where Sofia and Amy work, and the view Levi paints in watercolours is the view from the terrace.

Will I return next year? Absolutely! For one week beginning 26 June 2019.

Today’s one of the happiest days of the year – a publication day. One Summer in Italy is sent out into the world … well, it’s sent out to shelves and portable devices, anyway. I hope you like my latest book baby.

The jokey term for a novel ‘book baby’ came into being for a reason, I think. Though a fantastic, joyful event, there’s a lot of hard work involved in giving it life.

Here’s the bullet-point version from my perspective:

I can’t tell you in the same detail what the other side of the process is, carried out by the fab Avon team, but it will include the all-important cover (I LOVE the cover of One Summer in Italy), editing, scheduling, typesetting, promo, marketing and blurb writing. I’m involved in some of those areas too, mainly the promo.

Underpinning the process on both sides is respect, co-operation, negotiation, discussion, and a whole heck of a lot of emails!

But it’s worth it when this is what we end up with: 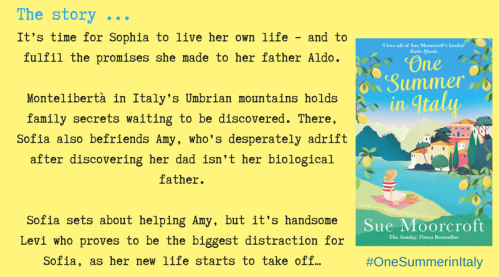 How I created a town in Italy

As it’s now only one week until One Summer in Italy is published I thought I’d write about the location.

I love to create settings for my novels, whether it’s a little English village or a town in another country. One Summer in Italy is set in Umbria, a verdant region of Italy, and there I built in my imagination a town called Montelibertà.

Where did Montelibertà come from? For the last several years I’ve been lucky enough to run writing courses or retreats for Arte Umbria. The venue is an old stone hunting lodge and it looks out over the rolling Apennines. Their terrace is one of my favourite places and I used it as the basis for Montelibertà, beginning with the view, which my hero, Levi Gunn, is in town to capture in watercolours.

The building itself grew in my imagination to a small hotel called Casa Felice (Happy House), with a café in front of it – Il Giardino (The Garden, in case you hadn’t guessed). I had to work out how many rooms there would be, where the dining areas were, Reception, back offices, kitchens, even the utility yard. I added in a little marble to the stonework, because that’s what hotels often do.

And I had to create a town for Casa Felice to stand on the edges of. I seemed to have to know a lot about the town too – where the church is and what it looks like; what’s beyond Case Felice; where the cemetery is; the piazzas, the streets, even in which direction the slopes run. I made the town, Montelibertà, a smaller version of the wonderful medieval town of Orvieto, which is only a couple of trains stops, a funicular and a bus ride away. I’ve visited it several times when at Arte Umbria. I spent a wonderful day – and an entire phone-charge – taking photos in Orvieto. Then I took out my trusty big sketch pad and began on the map.

Sorry it’s not a very good pic. I’ve never found the time to ink the map and tidy it up.

I even had to work out transport links, the nearest autostrade or motorway, the railways and the buses. My map is no work of art – slopes marked with the words ‘up’ or ‘down’ are functional rather than pretty – but it works for me. My library of photos from my various trips to Umbria have been mined throughout the writing of the book, so it’s all pretty clear in my mind.

I called the town ‘Montelibertà’ as it’s set in the mountains and represents what Sofia is seeking when she travels there, her father’s home town – liberty. Does she find it? Welllllll … she finds a whole heck of a lot of things, most of them unexpected. 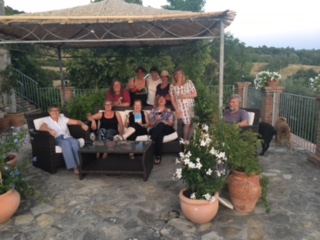 If you’re interested in joining me on a writing retreat at Arte Umbria this summer (20-17 June 2018 or 27 June-4 July 2018) then you can read more about it on their website. You can also read earlier post, Did the Writing Retreat Work? here. (The answer is ‘yes’, by the way. I wrote almost a quarter of the first draft of One Summer in Italy in one week.

One Summer in Italy will hit portable devices or book shop and supermarket shelves near you on May 17 2018. 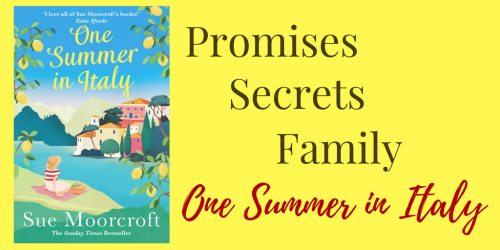