… that Just for the Holidays has been shortlisted for a RoNA!

The Romantic Novelists’ Association runs the Romantic Novel of the Year Awards every year and they’re currently sponsored by Goldsboro Books. You can read more about this year’s awards on the RNA blog here but, in short, the event will take place on the 5th of March at The Gladstone Library in London. There are seven categories – my shortlisting is in the Contemporary category – and each category has a winner, who’s presented with a trophy sometimes referred to as ‘a RoNA’. Then the winners of the categories go forward for the overall award of £5,000 and a trophy to keep for a year. The latter is usually called ‘The Rose Bowl of Doom’ because everybody dreads dropping it.

This year the awards are to be presented by Rev Richard Coles, who happens to come from the town I live in now, and the judges for the overall award are: Matt Bates, the Fiction Buyer for WH Smith Travel, editor Alex Hammond, writer Elizabeth Buchan and Liz Robinson, book reviewer for Lovereading.co.uk.

I’ve only been lucky enough to be nominated for a RoNA once before, for Dream a Little Dream, when, unfortunately, somebody fainted in front of me, dumping me hard on my bum, drenched by my wine and that of two other people I crashed into. Richard & Judy were presenting the awards that year and they did ask over the microphone whether we were all OK. I was, apart from a bruise and a bra full of wine. (And I didn’t win.) 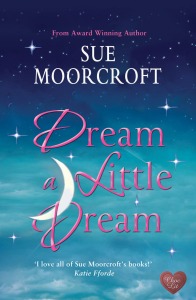 I always go into awards with the view that I won’t win, and I’m usually right (though Love & Freedom did win a Readers’ Romantic Read of the Year Award), but to be nominated is just SUCH a pleasure.