Far be it from me to boast … But I’m going to. WriteStars received this write up of the workshop I led for them, and have given me permission to reproduce it. So here it is …

Writing a novel seems to be a global ambition. From the outpourings on forums, blogs and social media – not to mention the boom in digital self-publishing – it’s something we all dream of.

And if we don’t dream  of it, it’s because we know we could do it. Right? It’s just that we don’t have the time.

Cue Sue Moorcroft, best-selling novelist and inspiring creative writing tutor. That’s why we’re at the George Hotel in Stamford, Lincs on a course organised by WriteStars: isn’t it appropriate that someone who shares the secrets of writing fiction has written a novel called Dream A Little Dream?

We’re a mixed bunch. Some want to write romantic fiction, others are planning children’s books, historical sagas and young adult titles. One or two think writing fiction might be good fun and have come to find out more.

Someone asks why I’m here, as I’ve written lots of non-fiction books and had a children’s novel published. There are two simple answers.

The first is that  my novel got good reviews but sank without trace and I want the next one to stay afloat. I also know that writing one kind of book isn’t the same as writing another, any more than a tiger is the same as a leopard.

The second is that I heard about WriteStars through my niece, Claire, who works for Hopwood PR and is handling the company’s publicity.  Claire knows I want to flex my fiction muscle again and gave me a kindly and encouraging kick up the backside when I moaned that I’d missed the fiction boat.

On the workshop, we’re straight off the starting blocks as Sue shows that writing isn’t all down to inspiration. There’s also a  lot of perspiration and plenty of frustration. The joy of her workshop is that she shows how to maximise your chances of getting it right and minimises the risk of falling down all those nasty traps which line the route.

Five minutes into the course, she gives each of us a slip of paper on which is written the gender, age and mood of a character. Mine’s a 12-year-old boy who hates PE and is feeling grumpy.

We have ten minutes to create a pen portrait, which we read out in turn. Sue then asks questions – where does your character live, what does he wear, does he have a girlfriend? As we join in, we learn how to create characters through dialogue, how to avoid stilted descriptions and how to flesh out a skeleton.

It’s fascinating. It’s also fun, so even the shyest participants enjoy themselves. The room’s buzzing with ideas and laughter, which sets the tone for the day.

We look at creating first pages which hook the reader, avoiding soggy middles, the importance of conflict and how to resolve it. We learn about research and about the discipline of writing. If you watch Coronation Street/East Enders/whatever, spend an hour writing instead.

A workshop can’t work miracles. Or who knows? There was some obvious writing talent in that room and I’d love to find out, a year from now, what everyone has achieved.

As for me, the Moorcroft magic is irresistible. The WriteStars short story workshop with Sue that’s planned in Cambridge next January? Put my name down now, please.

Carolyn Henderson is a freelance journalist and author. My thanks to her.

I’m doing a happy dance (mainly the cha-cha with a tiny bit of jive thrown in) because yesterday I  learned that Is This Love? has been shortlisted for the Readers Best Romantic Read Award at the Festival of Romance.

The paperback isn’t even out until the 7th of November and Is This Love? has already received a nomination. That is truly a reason to dance and be happy. In fact ‘happy’ isn’t strong enough a word – I feel as if a giant balloon has swooped me up into the sky.

As I was already going to the Festival Ball on Saturday 9th November, where the award ceremony takes place, I have bought a dress (purple, on theme with the cover, although I didn’t think of it at the time) so I’m all sorted.

The shortlist is strong (Scarlett Bailey, Miranda Dickinson, Liz Fenwick, Jane Lovering, me and Hazel Osmond) and congratulations to them all, and to all the authors shortlisted for the Romance Reader Awards, the Industry Awards and the New Talent Award at the Festival of Romance.

The Romance Reader Awards are judged by a reader panel and so this nomination says to me ‘We like your book’. No commercial considerations weigh with a reader panel – each reader must read one dozen books and every book gets at least three reads – it’s simply that  Is This Love? is in the top six of the books they liked best of all those they read for the award. There can be only one winner for each award, of course, but actually, winning doesn’t matter to me as much as you might think. Last year I received four different nominations and didn’t win a sausage (in fact, had I won and the prize turned out to be a sausage, I would have been disappointed) but I thoroughly enjoyed those nominations, the validation, the happy feelings, and the awards events.

But I have to admit that in 2011, when I did win, it was … incredible. That’s when Love & Freedom won the very same award for which Is This Love? has received its nomination.

The moment when the announcement was made is etched on my heart forever as one of those rare instants of pure joy. And I didn’t win a sausage, I won a beautiful crystal trophy. Then a waiter bought me chocolate cake and my evening was complete.

Well, for one thing, yesterday was publication day for my RNA friend Alison Morton’s new book PERFIDITAS, the second in her thriller series comes out today, featuring her heroine Carina and her adventures, not least her complex relationship with the enigmatic Conrad. If it’s anything like the first in series, INCEPTIO, it’ll be a great read. Historic authors Simon Scarrow and Jean Fullerton and writer and broadcaster Sue Cook have endorsed it, so I might take a look at it!

Cool cover. While we’re talking about covers, I’m going to put Is This Love? in again, because it’s just too pretty to leave out of the discussion. It’s out as an ebook now and paperback on 7 November.
Last night I was the guest of Leicester Writers’ Club to talk about Is This Love?, my career, and to announce the winner of their Hook, Line, Winner competition. It was a really fun evening and being made welcome by a writing group is one of the major perks of a writer’s life.

The pleasure of being an author (great reviews for ‘Is This Love?’)

Really thrilled, this morning, to find notification of great reviews from:

Serendipity Reviews and Being Anne

Being an author is  a pleasure. There’s a huge amount of hard work goes into each book (not just my hard work but everyone concerned with the production and promotion, too) and although I always love the characters, it’s incredibly warming when other people love them, too. It makes worthwhile all the days when the plot won’t work and the characters won’t behave and the whole point of what I want to say is eluding me. In fact, once good reviews start coming in, all that’s forgotten (especially as, by then, I’m writing new book to agonise and doubt about!)

Being a reader is an equal pleasure.  When others are watching the TV I’m reading. On trains I’m reading, in bed, over lunch, on planes, in waiting rooms, even cooking dinner (book/ereader in one hand, spoon in the other …), I’m reading. To lose myself in a wonderful story (usually a love affair, in my reading diet), want to meet the characters and visit the places is an absolute joy. It bathes me in a golden glow of satisfaction and it takes my mind away from whatever bad stuff there is in my life.

If you’d like to know more about the hero of ‘Is This Love?’, Jed Cassius, read an interview with him here.

Ebook publication day for Is This Love?

Today’s ebook publication day for Is This Love?

It’s kind of crept up on me as I’m busy with the next book (which has at least three possible titles …) and have been stopping to do the promo for Is This Love? whenever requested, without realising that Tamara and Jed would soon be let loose on the ereading public.

So, what can I tell you about the book? Well, it’s about the different types and qualities of love.

Tamara has never moved away from Middledip village out of love for her sister, Lyddie, who suffered a hit-and-run accident when she was a teen and needs more care than most adults. Jed, teenage sweetheart of Lyddie, left the village around the time of the accident and the story opens when adult Jed returns to explain who was driving the car that hit Lyddie. He’s a bit of a mystery, is Jed, having dropped out of society for a while at sixteen yet somehow managed to land a great job without a qualification to his name.

As a ten-year-old, Tamara had harboured a secret crush on Jed – and those feelings come rushing back. But now she can’t make up her mind about him. Is he one of the good guys?

I had a lot of fun with this book. Tamara’s a yoga instructor and yoga is one of my passions, so the research there wasn’t difficult because my own yoga instructor, Gail, gave up her time to help me. But there’s an alpaca herd in the book, and millionaires, and a lot of money, all of which had to be investigated. I had to find out how much half a million pounds in £50 notes weighs and whether a woman with a bad leg could carry it, when alpacas have their babies and how to look after them (happily, I have other friends, Sue and Adrian, who keep alpacas), what a close protection officer does (Jed has a stepbrother, Manny, who heads up security for the millionaires) and other fascinating stuff … like what happens at a spa day. (I had to do a day and a weekend, just to make double sure I had it all covered …)

The less fun research was into acquired head injury. My thoughts are often with all those who have suffered. 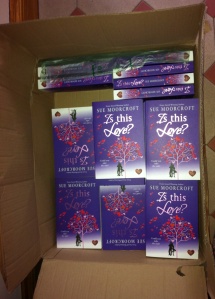 The paperback of Is This Love? will be released on 7th November 2013. I received my author copies just before I went on holiday in mid-September. Pretty! It’s a sight that always makes my heart sing.