Dream a LOT of Dreams!

TODAY IS PUBLICATION DAY FOR DREAM A LITTLE DREAM! 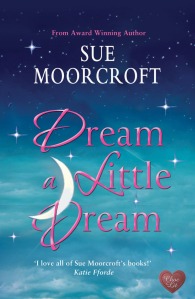 What would you give to make your dreams come true?

Liza Reece has a dream. Working as a reflexologist for a troubled holistic centre isn’t enough. When the opportunity arises to take over the Centre she jumps at it. Problem is, she needs funds, and fast, as she’s not the only one interested.

Dominic Christy has dreams of his own. Diagnosed as suffering from a rare sleep disorder, narcolepsy, disillusioned with his live-in girlfriend and discharged from the job he adored as an Air Traffic Controller, he’s single-minded in his aims. He has money, and plans for the Centre that don’t include Liza and her team. But dreams have a way of shifting and changing and Dominic’s growing fascination with Liza threatens to reshape his.

And then it’s time to wake up to the truth …

I’m honoured that a whole host of fabulous writers, broadcasters, editors and friends are joining me to celebrate the publication of Dream a Little Dream by sharing their dreams with you. Each day, over the next couple of weeks, one of them will guest post – and there will be some great giveaways, too.

So, I’m going to kick off with the dream that I banned the rest of them from using – it was my dream to be a writer.

I began writing ‘books’ when I was about eight – thinly disguised rewrites of the Famous Five series by Enid Blyton, illustrated by me. In the last year of primary school I had a teacher whose only saving grace was that he told me I could write. I kept trying to make my ‘compositions’ into a book but he’d never let me get past page 5, because then I’d have to ‘Finish it up! Finish it up!’ so that he could get on with the marking.

I held on to my dream through senior school, still slightly awed that I could get good marks for making stuff up (only in English. It didn’t work in maths). I wasn’t put off by a coworker at my Saturday job (in a butcher’s shop – all glam, me) telling me that I was talking out of the back of my head (clean version) when I said I was going to be a novelist.

But I did allow myself to be distracted when it came to getting a proper job, after college. I kept on writing … But my dream of being a novelist seemed to recede. I think this was mainly because I didn’t know any and I had no idea how to make it happen. It seemed the kind of thing other people did. Special people who had been sprinkled with sparkly fiction dust, or something.

When my children were small and I only worked part-time, the writing bug leapt up on my shoulder and finally began to tell me stories that had enough substance to fill a hundred, two hundred sheets of typewritten paper. I’ll never forget the eurphoria of finishing that first book. Or the second.

No publishers wanted them, of course. To say they were unpublishable is polite. I caught on that I was doing something wrong and began a course – the same kind of course I teach on, now – and took what I felt was a step back, in that I began writing short stories. And, miracle! After the first thirty or so I sent out, I sold one! Whee! The People’s Friend, a proper magazine that you could buy anywhere in the country, published my work. And then My Weekly did it. And Woman’s Weekly.

It was a happy period. But … they weren’t novels, were they?

I never stopped writing the novels. I joined the Romantic Novelists’ Association, where I was privileged to find lots of people who wrote novels, and, yes, maybe they had been sprinkled with sparkly fiction dust – but they were also creative, imaginative, hard-working people who had kept on keeping on until they found success.

And, finally, after eighty-seven short stories and a serial, I received that phone call, the one I’d dreamed of for so long. ‘I have an offer for you.’ That’s how it feels to have a dream come true.

If you’d like to win a signed copy of Dream a Little Dream just tell me about one of your dreams you made come true. The story I like most wins the copy.

Tomorrow, the wonderful Carole Matthews will be sharing her dream post with you. Check back then.

21 responses to “Dream a LOT of Dreams!”

This site uses Akismet to reduce spam. Learn how your comment data is processed.