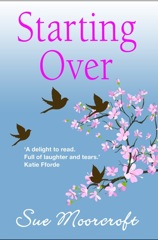 I received a lovely Twitter direct message from a new reader, last week. She said, ‘How clever of you to have the Twitter bird on your book cover!’

I thought, ‘Gosh, that was clever. I didn’t design the cover and I don’t think I was even ON Twitter when Starting Over came out!’

But, fact is, I’d hate to be without Twitter, now. It’s not just a dumping ground for, ‘Oh no, not more snow!’ or ‘Whoo! Finished my first draft!’ Tweets (although I am guilty of those …). Twitter is just a brilliant resource.

Is the A43 between Northampton and Oxford running OK? Yes, says a man in Towcester.

I’m really stuck on a point of American law … Well, whaddya know? Within FOUR MINUTES – honestly – a wonderful lady (@romancemama) is put in touch with me through a mutual Tweep. She’s had 25 years experience in exactly the area I’m stuck on and sorts me out via email.

Does anyone do their own web design? What happens if your site is compromised? Four really helpful replies, including one from Joanne Harris (@joannechocolat), and a lot of sage advice about PCs and how to give them viruses. (We pretty much decided that my hero ought to have bought a Mac instead of a PC but that would ruin my plot!)

And it was Twitter that got me my F1 column at girlracer.co.uk.

I have to admit, there’s a whole load of stuff I don’t read on Twitter but it’s so brilliant for getting help from people! In exchange, I have offered help to others (I’m not a complete Tweetasite) and answer such questions as I can, about short stories and romantic fiction and whether dogs are warmer than hot waterbottles, on your lap.

This site uses Akismet to reduce spam. Learn how your comment data is processed.