Had a brilliant morning, yesterday, being a guest on the Bernie Keith Show on BBC Radio Northampton. You can listen in here – move the slider up to 2:37.30

Bernie (and his gorgeous dog, Riley) made it a relaxed and fun experience and I couldn’t believe it was over so quickly. But Bernie kindly said they’d welcome me back in June when All That Mullarkey hits the shelves.

I was invited on to talk about Loves Me, Loves Me Not and was delighted that Bernie had not only read many of the stories, but had interviewed contributors such as Carole Matthews and Joanna Trollope.

The presenter makes or breaks the interview, of course, and Bernie had done his research and gave me the opportunity to mention just about everything I’m involved with, so I came away delighted. And I left him a chocolate bar and signed book – what greater gesture of esteem is there?

You can also read an on-line interview with me about Starting Over, here at Conversations With Writers, a great site, packed with material about authors.

Speaking of on-line presences, my publishers for Starting Over, Choc Lit, have begun an author blog at http://blog.choc-lit.co.uk/ and I have blogged the first post, Cover Stories. So do go along and tell us what you think.

Tagged as All That Mullarkey, BBC Radiio Northampton, Bernie Keith, Conversations with Writers, Loves Me, Loves Me Not, radio, Starting Over

I’ve been asked to post a little about writing short stories for radio. I have to admit that I haven’t done a huge amount of this – five for Short Story Radio is the sum of my dabbling – but with Internet radio stations and websites incorporating podcasts, the area is opening up.

Early decisions need to be made about the central character:

The actor that eventually reads your story for broadcast will be suited to the narrating character. In italics or underlines state what type of voice the short story is written for: Gerald is a middle-aged educated man without much accent. Ron, his father, more down to earth and with a Southport accent.

A radio short story is read by an actor. An actor. Not a cast. This means all dialogue must be suitable to be read by that actor. Dialogue is not as effective to listen to as when read from a page and the BBC, for instance, suggests that you cut it or cut it to a minimum for a short story. For broadcast we use a greater amount of reported speech than we normally consider good craft. You need to think, too, about attribution of any dialogue. A reader can see who’s speaking by the way you’ve arranged your paragraphs, but a listener cannot. They need to be told, immediately.

The woman called out to him. ‘The water’s rising! I’m moving my things upstairs.’

Cut indicators such as, she grumbled. The actor will be able to use a grumbling tone of voice and should be able to pick up that it’s necessary from words and context.

All kinds of people listen to the radio – as they work, relax or drive. Generally, they’re adults. So, appeal to the adult mind but avoid offensive language and subject matter because children may be in the vicinity. A listener doesn’t exert the same concentration as a reader does. Make your story palatable and attention grabbing and use only three or so characters. A 15-minute radio short story slot needs a story of 2100 to 2400 words. Use the active voice wherever possible and simple sentences.

The producer wants stories that appeal to a wide audience, offend no one, bore no one, irritate no one, grab the attention of everyone and make them want to switch on again the next day, thoughtful and dramatic enough to grip the listener yet with the odd touch of humour to make them feel the better for having listened. A horror story, for example, will only satisfy a sector of a potentially wide audience. And it will frighten the kids. (And, probably, me.)

An idea cannot be too big for radio! No set is necessary as it’s created in marvellous colour in the listener’s mind’s eye. Take your listeners to desert islands, remote jungles or a street in your home town, the cost is the same. One writer, one actor, one studio and a small production team. Stories can be first or third person.

Short story openings should grab the attention and begin delivering information immediately but don’t make it the only place you mention something crucial to the plot – listeners sometimes take a minute to tune themselves in. Endings tend not to be open ended or inconclusive, but definite. A twist in the final lines sometimes go down well (except for with listeners who are interrupted at the vital moment).

Studying the radio short story market is like plotting a course through shifting sands. Slots come and go on local or hospital radio and are minimal on the largest radio stations. As Internet-based radio stations proliferate some are devoted to the spoken word. On these budget stations there’s room for a lot of stories – but there may not be a budget to pay the writer.

Listen to the output to understand what the radio station wants and needs from writers. Find their website for submission guidelines.

And all of this reminds me that I’m going to be interviewed on the Bernie Keith Morning Show on BBC Radio Northampton on Friday 26th February 2010, 11.40am. 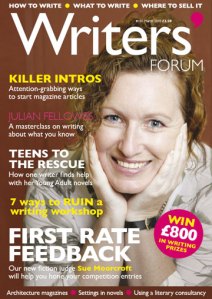 Well, I’ve left it a little late in my career to be a cover girl – but here I am!

I’m beaming at you in glorious colour from the newsagents’ shelves as I’ve taken over judging the Writers’ Forum fiction competitions, which means that Jan Jones and I will be providing the optional critiques. As for the Target Practice competitions in the last two years, the critiques will be more analytical than was allowed by the previous ‘tick box’ format. I’m not a fan of tick box critiques, especially now that desktop computers make it so possible to turn out something neat and professional, electronically. It helps to be able to type quickly – those years at Motor Cycle News as a copytaker weren’t wasted.

I have to admit, I was really tempted to read this magazine on the train home from South Shields, yesterday, displaying the cover in exaggerated fashion to see if anyone did a double take. But, viewing the disconsolate and beery Peterborough United footie fans returning from an away match loss and determined not to let a second pass without a bellow or a belch (them – not me), I decided I’d rather be as invisible as possible, thank you! (I also decided that I’d rather not use train loos that said beery footie fans had already visited … a wise choice.)

Anyway, to celebrate the new Writers’ Forum fiction competition relaunch, for a trial period you can enter the competitions free if you are both a subscriber and enter electronically at Writers’ Forum‘s website! You do still have to pay £5 for the critique, if you elect to take it, of course. Otherwise, the fees are £3 for subscribers and £6 for non-subscribers, plus critique fee, if selected. The prize fund is good, too – £300 plus publication in Writers’ Forum for the winning story, which is more than you’ll get from most magazines, at present.

As I’m a creative writing tutor as well as a writer, it has been suggested that I should include a few hints and tips about writing, here, on my blog. As I’ve just been asked about writing serials, that’s where I’ve decided to begin …

Serials appear in a few weekly magazines. Those magazines I know of in the UK and Ireland are:

My Weekly arrange two- and three-part serials to be written by writers they already know, so that’s not a good place to begin, unless you already have a sturdy short story track record with them.

The People’s Friend is quite flexible and publishes serials of all lengths. Absorb and understand the ethos of the magazine and send for their writers’ guidelines before you begin. PF is open to several scenes or chapters per episode and the fiction team is looking for an opening instalment of 6,000 to 7,000 words with following instalments a little shorter, around 5,000 words. They’re also happy for multi-viewpoint, which means that you can follow the stories of several characters (so long as they all impact upon one another, of course). Approach Shirley Blair, the fiction editor, with a clear idea for the serial. Don’t outline the whole serial, don’t write the whole serial, just know what you want to write about and the characters. If you’re asked to write the first instalment don’t go further because you might be asked to rewrite and rewrite. Once they have the first instalment as they want it they’ll pay you for it and expect the rest of the serial to follow – one instalment at a time. Think family-related entertainment.

Woman’s Weekly is looking for new serials, right now! The fiction team wants three-parters, 3800 words each. As for The People’s Friend, they need to see the idea before asking to see more. Email Fiction Editor Gaynor Davies at gaynor_davies@ipcmedia.com with your idea.

The last time that I spoke to Ireland’s Own they were looking for serial ideas. Be aware that Ireland’s Own is a general interest magazine – so make your idea appeal to both genders.

Serials are an important part of a magazine and often planned and laid out ahead of almost every other component. AND, after the magazine has published the serial, you can sell it as a novella, a large print book or even a full novel (although that might take expansion). So you get paid again!

Loves Me, Loves Me Not

Loves Me, Loves Me Not

The paperback of LOVES ME, LOVES ME NOT comes out on Friday. It’s already available online at hefty discounts, as at Amazon or Play.com.

I’m doing a big promotional event at South Shields Library from 1pm to 4pm on Saturday the 13th of February 2010 with Judy Astley, Benita Brown and Elizabeth Chadwick. This is the first big event I’ve been involved with organising so I do get a bit of a squirm in my tum when I think of it … But it will be lovely!

The programme includes how LOVES ME, LOVES ME NOT came about and panel discussions concerning what we all read and what makes a good romantic novel, as well as coffee time meetings with each author. Benita Brown writes absorbing sagas set in her native North East England, Elizabeth Chadwick stirs the blood with her historical fiction and Judy Astley writes fabulous romantic comedies. So it should be a great event with something to interest everyone!

I love library events because they’re such good value for the reader – and I just love being with readers.

Other events hoving over my horizon are:

February 20th – Get Writing 2010 Conference at the de Havilland Campus, University of Hertfordshire

May 9th, 1pm – 4pm  – Loves Me, Loves Me Not event, Newcastle Central Library